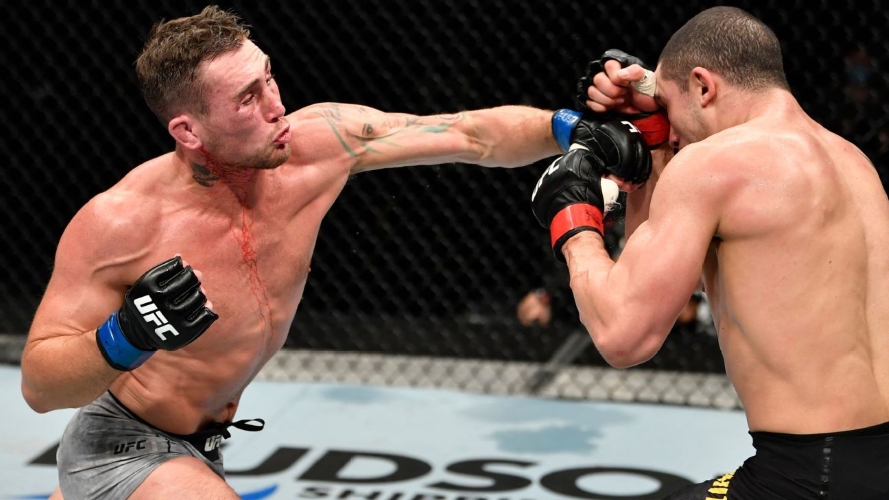 TILL VS VETTORI ‘FIGHT NIGHT’ CANCELLED

UFC Fight Night: Till vs Vettori (April 10 event) cancelled due to an injury suffered by “The Gorilla.”

-Kevin Holland has announced he will step in for Till for a rehash at an unspecified future date.

The Gorilla is OUT!

Darren Till, who was scheduled to meet Marvin Vettori for the middleweight main event of April 10th’s Fight Night, was officially ruled out from the bout, as stated to the folks at BleacherReport on Tuesday by MMA’s own Damon Martin.

Till, who is No.5 in the UFC’s middleweight division, is currently impeded from participating in the fight due to an injury, as was also pointed out by Martin.

Ever since falling to Adesanya back in 2018, Italian-born Vettori – who is only one slot down in the middleweight ratings from Till – hasn’t suffered a single defeat, and now counts four neck-to-neck wins in his record. Till, on the other hand, hasn’t fared as well in recent times: He was dealt a loss by Robert Whittaker in his latest outing last year, and has only had one single win in throughout his last four fights.

Till vs Vettori DrPPH Tip: Only the best pay per head operators will provide you with the greatest variety of UFC/MMA betting odds for your players. Keep in mind you can always look up the hottest pph providers by the quality of their sportsbook offer with DrPPH’s unique rating system.

Lastly, Martin mentioned that also-middleweight athlete Kevin Holland would be stepping in for Till for a later date, though it wasn’t specified when exactly that’d be taking place.

Holland, who has also been featuring prominently during the past months in Till & Vettori’s division, took to Twitter the same day to communicate his acceptance of the new challenge:

By Kevin Holland (@Trailblaze2top) “I already accepted the fight an hour ago… @callbigmouth”, to which Vettori (@MarvinVettori) quickly responded with a simple and succinct “Let’s go.”

Find your Daily Dose of expert Pay Per Head advice at DrPayPerHead. Can you trust your Pay Per Head platform? Follow us on social media to find out about the top pay per head services and products.