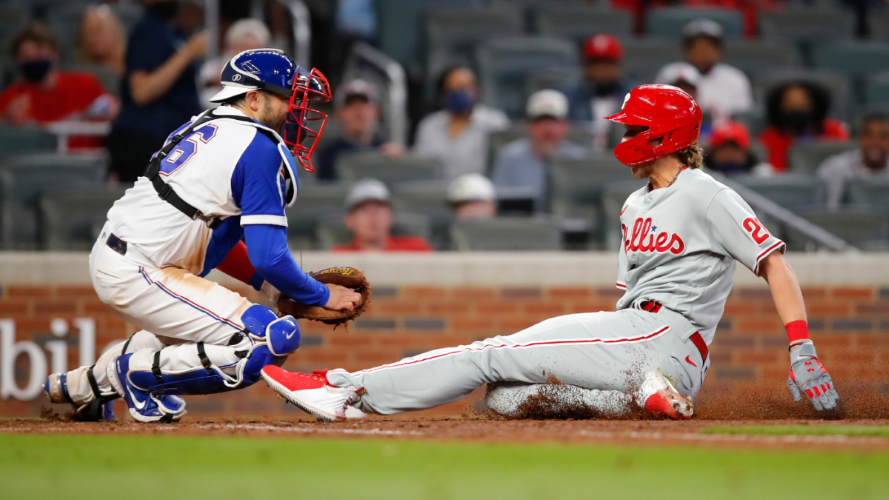 -During the 9th inning of Sunday’s match, umpire Lance Barret called Alec Bohm’s unclear home slide as ‘safe’, leading the Phillies to win 7-6 over the Braves.

-In spite of criticism by other players and the media, the MLB has put its support behind Barret’s decision.

Philadelphia Phillies win: Was it ‘Safe’ or wasn’t it?

Depends whom you ask.

The Atlanta Braves lost Sunday’s match vs the Philadelphia Phillies to a scant 7-6 difference, after the former lost a replay challenge over a very controversial home landing by Phillies’ Alec Bohm.

The baseman went for a rough home base landing during the 9th inning of the game, despite catcher Travis Arnaud’s attempts at an effective tag. The resulting run effectively put Philadelphia on top of the scoreboard. See footage of play over at ESPN.

DrPPH Tip: The MLB season means SERIOUS business for the sports-betting industry, but it isn’t one that should be taken in lightly. There’s LOTS of things you ought to consider in regards to your particular pay per head baseball products, including the variety of baseball props you can offer to your bettors. When searching for your ideal PPH, make sure they provide you with a sufficient assortment of baseball odds, including inning specific odds, pitcher-restricted and pitcher-free price variants, and many others.

Who made the right call?

We might never be able to tell. What we CAN tell you though is, the MLB has already made its mind about it, and has declared that the replay official “could not definitely determine that the runner failed to touch home plate prior to the fielder applying the tag.”

Alternatively, according to ESPN, Braves’ starter Drew Smith declared after the fact that “We have five different angles on a national televised game, and it’s clear that his foot didn’t touch the plate… For the MLB not to overturn that, it’s embarrassing. Why even have replay if you won’t overturn that?”

Meanwhile, all Bohm had to say in the same regard was: “It was called a ‘safe’, that’s all that matters.”